It was good to be able to hold a ‘normal’ festival this year. Right from the start things ran smoothly. With all the trees booked, including several new individuals, groups and organisations decorating one for the first time.

When the trees arrived on the 28th November they looked so good, all a lovely shape with plenty of rich green branches. 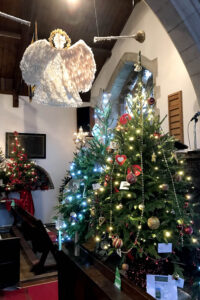 Many people commented on the originality of the tree titles and the variety of things used for the decorations. Many hours were spent by lots of people making intricate objects that went onto different trees.

The church was a hive of activity during the week of preparation with people and groups coming to do their ‘bit’. For many it was several years since they had opportunity to meet in church.

One tree much commented on was titled ‘Peace in Ukraine’, the people who had booked it were unable to do the decorating due to a mix up of dates. However there were two people from Ukraine staying locally, and they made the decorations for that tree.

It was good to welcome Jess, Jo & Richard for their concert of traditional English music on the last Saturday  Something we had missed for the two previous years and was greatly enjoyed.

We also welcomed again the children and parents from the local ARC and Nursery Hill Primary Schools, for their respective end of term carols and nativity readings.

As in past years we had some very encouraging comments in our visitors book i.e. ‘Tree-mendous!!’, ‘Fantastic!’ and ‘Stunning’, ‘Amazing-hard work and brilliant’, ‘Lovely atmosphere’

By the end of the event a total of £2371 had been raised of which £600 has been sent to the Mary Anne Evans Hospice and a further £96 given to the churchyard fund from the Remembrance Tree stars.

It is estimated that there would have been nearly 1000 different people enter the church during the event. It was good that we were able to welcome each and every one of them.

Thank you to the many people involved in putting this event together, providing support during it and clearing up at the end.

With God’s good grace we had another wonderful festival.

Please click here to make a donation or use the QR code below: